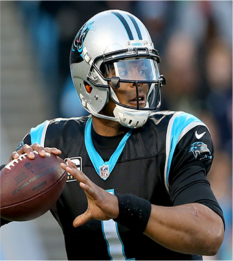 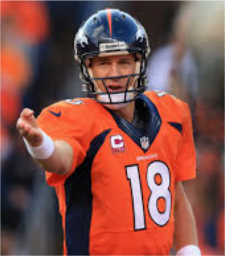 How many of you watched Super Bowl 50 this year?  For those that know me, I am a Pittsburgh Steelers fan, so I didn’t have a favorite team. To me, I was just watching the game for the love of the sport.

When the day started on Superbowl Sunday, I did not expect to learn a valuable leadership lesson from the whole event. But I did.

Two things happened on this day. And both involved interviews with the QB from each of the two teams that were playing in the Superbowl. If you’re not a football fan, the QB is the leader of the team on the field. They understand the plan for the game, and they work with the coaches to define the plays that they are going to execute in the attempt to win the game.

The first thing that I encountered was a pre-game interview with the Denver Broncos QB Peyton Manning.

If you don’t know this great QB, he has the most records in football than any other in that position – just a few of the records he holds are:

When you see someone like this be so successful, it’s hard to believe that a person with this much success could be humble and respectful. But in this case, Peyton is one of those great players that fans of other teams hated to love. Football fans like me show their support for their team by despising the great players and star players from the other teams. But in the case of Peyton, he’s one of those players that everyone respects, regardless of their selection of a favorite team. 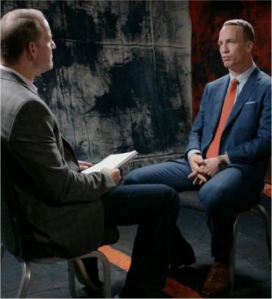 In a pre-game interview, Peyton was asked the following::

What would be the legacy that Peyton Manning wants to leave behind?

His answer was inspirational:

Two of the most important things to me would be that my teammates said that I was a great teammate. That’s important to me. And, I think, the coaches that I played with and I played against would say that they respected me. That would be important to me. 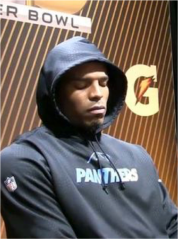 After the Superbowl, the media flocked to both teams. They wanted to cover the responses by both the winning and losing teams. As Cam sat in the interview, he was visibly sad, depressed, and low. When asked questions about the game he responded with:

His interview lasted only a little more than 2 minutes. Many were upset at him for how he behaved. Many were angry that he would not sit there and take the questions and give the fans (his customers) what they wanted.

I’ll be honest, my first reaction was disappointment in his behavior. How many of us get to walk out of our job when things are not going well? Have you been in a meeting where you are the center of the discussion, things were not going well that day, and you stand up, walk out without saying anything, and go home? Probably not. Yet this is the job of the players in football, and one of their stars did this very thing.

I then began to look back to the other QB, Peyton. I recalled many big games in which he lost, where he would give the media and his fans as much time as they wanted in the interviews after a game in which he lost. A few years ago, Peyton was in the Superbowl and he lost to another team, and this very thing happened.

But the story behind all of this is as follows – it took maturity and learning for a veteran like Petyon to handle the pressure, disappointment, and impact of losing a big game. Cam will learn from this loss. And hopefully he will be prepared for the interviews in the event he loses another big game.

How can we apply this to our own lives as leaders in our professional and personal lives? What is the lesson to be learned here?

The FIRST lesson is simple…

Cam was well known for his celebrations during the game and the leadership he exhibited with a team that seemed unstoppable throughout this past year. He was always smiling, driving, motivating and giving direction to his teammates.

But when facing a team that came prepared with a strong defense that would shut down the aggressive attack of the Panthers, Cam was unable to handle it.

How many of you have had a ‘bad day’ at work in the last month? If you’re a leader, it’s so hard to keep your head up, and to motivate your team, your peers, and to keep pressing forward. But I challenge you today to keep going. There will be times when you are the only thing that will motivate someone else on your team. And being a leader is a big responsibility. But you can do it!

The SECOND lesson is about servant-leadership….

Servant leadership is an unselfish approach to leading others, giving direction, and being part of their success.

If you look at the statistics of this Superbowl, you will find that Peyton Manning did not have one of his STELLAR performances. While he holds almost every record you can imagine for a QB, it was not his performance that won the game.

It’s amazing how we can learn something about leadership in almost everything we do, everywhere we go, and everything we see or hear in the world. My challenge to each of you is to let LIFE teach you how to grow and become a great leader. Look around you, enjoy the times you have, and seek to find a story, an example, and a lesson from what you are experiencing.

And if you do that…you just might get that interview at the end of your career…where you can say “I am respected by my peers, my teammates, my manager, and managers on other teams”.

I wish you the best!

I am an International Speaker, writer, author, blogger, and Director of QA & Project Management with over 25 years of experience. I have always had an intense passion to mentor, coach, and guide others to grow professionally. It is fulfilling to witness the look on people’s faces when you are able to share with them something that is enlightening. I want to be remembered for the way I made others feel when they were around me! I can be followed at the following additional social networks – Please feel free to add me! Connections are our best way to help others! Twitter: @mikelyles ……. follow me and I’ll follow you! Facebook: www.facebook.com/mikelyles ……. send a friend request! LinkedIn: www.linkedin.com/in/mikewlyles ……. send a connection request! Learn more about me at: http://about.me/mikelyles View all posts by Mike Lyles

9 thoughts on “How Do You Want To Be Remembered?”